Names in this story have been changed for privacy reasons.

It was a Friday afternoon in the summer of 2017 when the grandparents arrived to pick up their 5 year old granddaughter, Kate, for the weekend.  This was a typical scenario since their daughter, Noelle, worked shifts and was estranged from her children’s father;  Noelle’s parents regularly cared for her children while she worked  and often  provided childcare when she was unable to be home.    When they arrived, rather than seeing their granddaughter waiting with a smile & eager to get the show on the road, they were met with police cars and officers blocking most of the street…as well as being inside the house.  As the story would unfold, the grandparents learned that their daughter and Noelle’s boyfriend (stepdad to Kate and her brother) were handcuffed and led out of the house in front of the very young children and taken away in separate police cars; the arrests were made for child abuse and child sexual abuse imagery, but details were scarce.  Even though the grandparents were identified as being Noelle’s parents, at no point was further information shared other than that Noelle was being questioned.

A communication was made that the young children were to be interviewed at the corner store parking lot by Child and Family Service workers.  At this point the CFS Workers interviewed each child and at no point would communicate with the grandparents who were not only care providers for their grandkids but were also family and the parents of the children’s mother.  When the grandparents were trying to chat with the kids to try to ‘normalize’ the situation somewhat, a CFS worker called out from across the parking lot and said that there should be no conversation with the children.  At no point did they explain the process of what was going on, nor attempt to establish the grandparent’s connection with the children.  Once these interviews were done, the children were to attend Children’s Hospital for forensic exams.

The family sat in Emergency at the Children’s hospital for five hours.  They were in crisis; they were in trauma and no one came out and interacted with them.  No one came out to explain the situation or to see how Kate, the child who was to be examined (and by this point was very frightened) was.  It seemed that no one cared.  We didn’t matter.  Kate didn’t matter.

After the forensic exam was finally done, the Police called to say that Noelle was ready for release and that she was ‘in a bad way and would obviously need help’.  What seemed to have unfolded was that Noelle was arrested so that she could be used as to leverage information from Jason (Kate’s stepdad) – information about how he had been abusing Kate for at least a year and had been posting naked photos and videos of her online, and selling them to a ring of pedophiles like himself around the world on the internet.  The police showed Noelle some of the pictures and she was overcome with guilt, shock and grief….devastated that this happened under her roof and by someone she loved and trusted.  The trauma of that evening was too much to bear.

Noelle’s parents described her as disheveled and incoherent upon release from the police.  Noelle wanted to die.  She felt shame and felt that she had been manipulated to build a case against Jason (even though there was already clear evidence to his guilt).  Noelle was left in a cold interview room with a table and a chair….and often no one else with her….no one to counsel her or to help her understand the process of what was happening.  She was suicidal and her parents did not think she was going to survive the night.

They attempted to have Noelle admitted to the Crisis Response Unit but after a brief interview with Noelle (who was inconsolable & unable to maintain her thoughts) they sent the family home ‘to rest’.

Three years later Noelle still battles the effects of that night:  she is a shell of herself.  She is often sullen and distant and will not talk about what happened even though Jason is now in jail and Kate is doing well for the most part. ‘Noelle is a victim.  We are all victims’ say the grandparents. ‘We didn’t know where to turn to or what to do to get the support we needed.  We were lost and felt like we had to fend for ourselves. Along this journey we did meet empathetic people who meant well but felt that many of the professionals they encountered did not work in such a fashion as to help provide support and direction….instead we were left to fend by ourselves and do what we thought best’.

The photos and videos of Kate will likely persist in the dark corners of the internet, perhaps forever, and the profound trauma that Noelle feels will likely be with her for all time but had the supports been different at the outset, their story would be very different.

While the grandparents are still seething at the system’s shortcomings, they are so very happy to learn about the development of the new centre that would help families navigate the process following disclosure of child abuse. Their hope is that the new centre will keep ‘a file open forever’ such that victims and their families can always get the help they need.

‘This is what we needed and it’s shocking that we don’t already have something like this; it’s time’.

Let this story be the reason you step forward today to support the Manitoba Child Abuse Response Centre. Let’s fix a damaged system. For children. For families. For Manitoba. 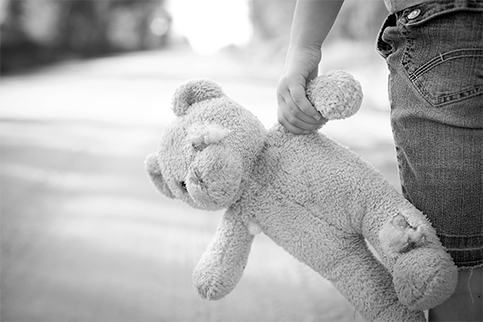